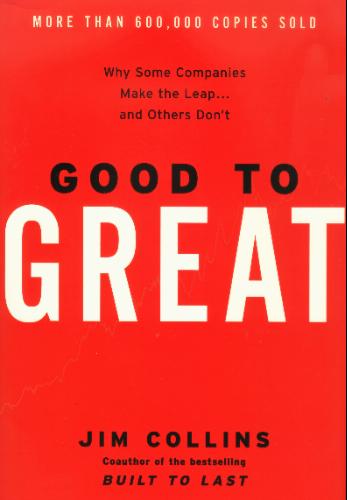 Good to Great By Jim Collins

I first heard about Jim Collins on the Tim Ferriss’ podcast. He came across as a very humble and passionate person and only a few minutes into the podcast I was already ordering some of his books.

Good to Great is the first of Jim Collins’ books that I read. It was difficult to put it down. The research that Jim and his team conducted seems very simple in retrospect but also very thorough.

The flywheel concept, which is distilled throughout the book is something that I think we all should incorporate into our daily lives. It is not something that belongs only to the business world.

As usual, what follows are my notes an highlights of the book. These might not make sense to you. I used them mostly to come back to them when I need to remember something from the book.

Few people attain great lives, in large part because it is just to easy to settle for a good life.

The good-to-great companies did not focus principally on what to do to become great; they focused equally on what not to do and what to stop doing.

“The best students are those who never quite believe their processors”. True enough. But he also said. “One ought not to reject the data merely because one does not like what the data implies”.

“I never stopped trying to become qualified for the job.”

This is humbling. Even at the highest levels of a successful organization there seems to be some sort of “impostor syndrome”. Working hard and improving are necessary things.

The good-to-great leaders never wanted to become larger-than-life heroes. They never aspired to be put on a pedestal or become unreachable icons. They were seemingly ordinary people quietly producing extraordinary results.

They will sell the mills or fire their brother, if that’s what it takes to make the company great.

Great leaders have a sense of duty avoid everything. They need to control their emotions and use reason above all.

The quiet, dogged nature of Level 5 leaders showed up not only in big decisions, like selling off the food-service operations or fighting corporate raiders, but also in a personal style of sheer workmanlike diligence.

Level 5 leaders look out the window to apportion credit to factors outside themselves when things go well (and if they cannot find a specific person or event to give credit to, they credit good luck). At the same time, they look in the mirror to apportion responsibility never blaming bad luck when things go poorly.

For these people, work will always be first and foremost about what they get – fame, fortune, adulation, power, whatever – not what the build, create, and contribute. Examples of bad leaders. Remember “Ego is The Enemy”.

…if people are on the bus because of who else is on the bus, then it’s much easier to change direction: “Hey, I got on this bus because of who else is on it; if we need to change direction to be more successful, fine with me.” Second, if you have the right people on the bus, the problem of how to motivate and manage people largely goes away. The right people don’t need to be tightly managed or fired upo; they will be self-motivated by the inner drive to produce the best results and to be part of creating something great. Third, if you have the wrong people, it doesn’t matter whether you discover the right direction; you still won’t have a great company. Great vision without great people is irrelevant.

To be rigorous means consistently applying exacting standard at all times and at all levels, especially in upper management. To be rigorous, not ruthless, means that the best people need not worry about their positions and can concentrate fully on their work.

Rigor in a good-to-great company applies first at the top, focused on those who hold the largest burden of responsibility.

Wurtzel spent the bulk of his time in the early years focused on getting the right people on the bus.

Cooper’s first goal was simply to grow as fast as possible.

For every minute you allow a person to continue holding a seat when you know that person will not make it in the end, you’re stealing a portion of his life, time that he could spend finding a better place where he could flourish.

“You must never confuse faith that you will prevail in the end –which you can never afford to lose – with the discipline to confront the most brutal facts of your current reality, whatever they might be.” - Admiral Jim Stockdale

Hedgehogs, simplify a complex world into a single organizing idea, a basic principles or concept that unifies and guides everything.

…all good-to-great companies attained a very simple concept that they used as a frame of reference for all their decisions, and this understanding coincided with breakthrough results.

“They stick with what they understand and let their abilities, not their egos, determine what they attempt.”

You can’t manufacture passion or “motivate” people to feel passionate. You can only discover what ignites your passion and the passions of those around you.

the purpose of bureaucracy is to compensate for incompetence and lack of discipline – a problem that largely goes away if you have the right people in the first place.

Avoid bureaucracy and hierarchy and instead create a culture of discipline.

“They had freedom. But freedom withing a framework.”

“We recognized that planning is priceless, but plans are useless.”

It all starts with disciplined people. The transition begins not by trying to discipline the wrong people into the right behaviors but by getting self-disciplined people on the bus in the first place. Next we have disciplined thought. You need the discipline to confront the brutal facts of reality, while retaining resolute faith that you can and will create a path of greatness.

Tremendous power exists in the fact of continued improvement and the delivery of results. Point to tangible accomplishments – however incremental at first – and show how these steps fit into the context of an overall concept that will work.

It is only through consistency over time, through multiple generations, that you get maximum results.

Profit is not the fundamental goal of a company.