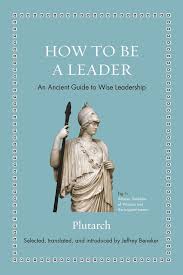 How To Be A Leader by Plutarch

The book is a compilation of some of Plutarch's essays on leadership. A lot of what he talks about is still applicable today. In a sense it seems that we've lost the way. We don't look up to leaders any more. Most people don't aspire to become ones. In ancient times good leader (for there were also many tyrants and bad ones) lead by example and reflected the best of their people. Today politicians play their own game, they play to gain something personally and don't pursue a political career to serve their people. At least in the most part.

To An Uneducated Leader

those who govern must first achieve governance of themselves, straighten out their souls, and set their  character alright, and then they should assimilate their subjects to themselves

Leaders, must be more afraid of inflicting harm than of suffering harm themselves. This is what causes them to be revered. This is the benevolent and noble sort of fear that leaders possess: to be afraid on behalf of those they govern

How To Be A Good Leader

It is inappropriate for the politician to imitate the manners of the people. It is fitting to understand them and to take the approach that is most effective for winning over each individual.

Pericles transformed himself with respect to both his body and his daily routine, so that her walked slowly, engaged in dialogue mildly, always presented a composed appearance, kept his hand inside his clothing, and made his way along only a single road.

Small faults appear great when observed in the lives of leaders and politicians. This is because the majority believe that important business, such as leadership and politics, also deserves to be free of every oddity and fault.

They say not to hold a wolf by the ears, but by the ears is just how one must control the people and a city.

We must not snatch glory away from our mentors. We must instead receive glory from them, together with their goodwill and friendship

It is proper that politicians yield to others with goodwill and kindness, allowing them to govern and be summoned to the speaker's platform.

Political leaders should make a conscious choice to promote stability and to avoid the madness and turmoil.

You must understand your own nature. When you are faced wit ha task that you are not best suited to accomplish, select as your colleagues those who are more capable rather than those who are like you, as Diomedes did when he selected the cleverest man to accompany him on his spying mission and passed over men who were brave.

Cato the Elder, at a time when Roma was already filled with statues, would not allow one to be made of himself, saying, "I would prefer to have people asking why there is no statute of me rather than asking why there is one". Material honors arouse envy, and the people believe that they owe a favor to politicians who have not received them.

Should An Old Man Engage In Politics?

Even if our nature seeks pleasure and joy by all means, the bodies of old people have given up on all pleasures, except those few that are necessary.

When Lampis, the ship-owner was asked how he acquired his wealth, he replied, "The greater part came quite easily, but the first, smaller part took time and effort." And so, in the beginning it is difficult to acquire one's reputation and power in politics, but once they have become great, it is easy to protect and increase them by means of ordinary deeds.

The Arcadians invited the Theban solders into their city to stay in their homes, but Epaminondas would not allow it. "Now they marvel at you and look on as you train in arms and wrestle", he said, "but if they see you sitting around the fire and eating beans, they will believe that you are no different from them".

For obedience belongs to youth, while old age is made to lead.

Books about piloting ships do not produce captains, unless those captains have often stood upon the stern to observe the struggles against wave and wind and stormy nigh

We ought to reject not the old but the weak, and we ought to encourage not the young but the able.

When someone asked the elder Dionysius if he ever had any leisure time, he said, "I hope I never do!" For, a bow breaks when it is stretched, but a soul breaks when relaxed.

Alexander did not wish to stress Bucephalus when the horse was older, and so he used to ride other horses before battle as he reviewed and arranged his troops. Then, once he had given the signal to fight, he would switch to Bucephalus and attack the enemy and run every risk.