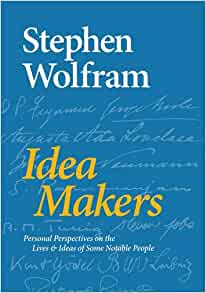 This book was one of the best books I read this year.

The exposition is clear and refreshing. Wolfram writes with clarity and speaks from experience, relating many of the stories to his own work on celullar automata and Mathematica.

The set of characters that he chose to wrote about is also peculiar and fun. There are essays about historical figures that had an influence in his work but that he never met. Other stories are about important figures that he interacted with and others still that are about less famous people that had an impact on him during their life.

Part of my interest is purely intellectual. But part of it is more practical—and more selfish. What can I learn from historical examples about how things I’m involved in now will work out? How can I use people from the past as models for people I know now? What can I learn for my own life from what these people did in their lives?

He didn’t read or listen too much; he wanted the pleasure of doing things himself.

This is a very important perspective. Many times we avoid doing things because they have already been done. And in the era of the Internet we are used to get things quickly, without much effort. A bit of discomfort and mystery is always good.

One thing about Feynman is that he went to some trouble to arrange his life so that he wasn’t particularly busy—and so he could just work on what he felt like. Usually he had a good supply of problems.

If we study a system that is capable of universal computation we can no longer expect to “outcompute”.

This is why it can be so difficult to predict what computers will do—or to prove that software has no bugs.

One might think of undecidability as a limitation to progress, but in many ways it is instead a sign of richness. For with it comes computational irreducibility, and the possibility for systems to build up behavior beyond what can be summarized by simple formulas. Indeed, my own work suggests that much of the complexity we see in nature has precisely this origin. And perhaps it is also the essence of how from deterministic underlying laws we can build up apparent free will.

Perhaps to reach the edge of a new technology is inevitable that there has to be hackiness.

Almost certainly it will never be known for sure whether his death was in fact intentional. But from what I know and have heard I must say that I rather doubt that it was

He seemed to have maintained a child-like enthusiasm and wonder for many intellectual questions throughout his life.

I always feel that one can appreciate people’s work better if one understands the people themselves better.

In the period 1952-53 von Neumann sketched an outline of a proof that it was possible for a formal system to support self reproduction.

It takes only very simple rules to produce even the most complex behavior.

John von Neumann was a happy and energetic man, working long hours on mathematical topics, and always having fun.

He worked hard, often late into the night and could be so engrossed in his work that he became quite absent minded.

Despite his successes, Boole seems to have always thought of himself as a self-taught schoolteacher, rather than a member of the academic elite. And perhaps this helped in his ability to take intellectual risks.

When none looks at history, sufficiently simple formal ideas have a remarkable tendency to eventually be widely used, even if they emerge only slowly from quite complex origins.

Both Babbage and Mary Somerville had started their scientific publishing career with translations.

She and William moved into a new house in London, intensifying their exposure to the London scientific social scene.

“I begin to understand Death; which is going on quietly & gradually every minute, & will never be a thing of one particular moment.”

Ada seems to have understood with some clarity the traditional view of programming: that we engineer programs to do things we know how to do. But she also notes that in actually putting “the truths and the formulae of analysis” into a form amenable to the engine, “the nature of many subjects in that science are necessarily thrown into new lights, and more profoundly investigated.” In other words—as I often point out—actually programming something inevitably lets one do more exploration of it.

Ada’s achievement was to distill from these details a clear exposition of the abstract operation of the machine [[the analytical engine]] —something which Babbage never did.

I think one can fairly say that Ada Lovelace was the first person to ever glimpse with any clarity what has become a defining phenomenon of our technology and even our civilization: the notion of universal computation.

I am fortunate to have lived in a time when ambient technology made this much easier to achieve, but in every large project I have done it has still taken a certain singlemindedness and gritty tenacity—as well as leadership—to actually get it finished.

I suspect that Leibniz’s successes in mathematics were in no small part due to the effort he put into notation, and the clarity of reasoning about mathematical structures and processes that it brought.

I’ve always found it tantalizing that Leibniz seemed to conclude that the “best of all possible worlds” is the one “having the greatest variety of phenomena from the smallest number of principles.”

Omnibus ex nihilo ducendis; sufficit unum (“everything can be derived from nothing; all that is needed is I”)

One area where he did try his approach was with law. But in this he was surely far too early, and it is only now—300 years later—that computational law is beginning to seem realistic.

How much are we failing to realize from the core computational way of thinking because we do not have the ambient technology of the distant future?

He was determined, he writes, to stay away from established mathematics so that he could “feel the excitement of being the first to find a degree of order in some real, concrete, and complex area where everyone else saw a lawless mess.”

Steve Jobs stands out most for his clarity of thought.

I think Mathematica may hold the distinction of having been the only major software system available at launch on every single computer that Steve Jobs created since 1988.

I was stuck by him explaining to me that NeXT was what he “wanted to do with his thirties”.

Russell Towle lived in a hexagonal house of his own design, in a remote part of the Sierra Nevada mountains in California. That he was a fan of Archimedes, and had learned Greek to be able to understand his work better. And that he was not only an independent mathematician, but also a musician and an accomplished local historian.

…the liar’s paradox (“this statement is false”), he came across what seemed to be a fundamental inconsistency: a paradox of self reference (“Russell’s paradox”) about whether the set of all sets that do not contain themselves in fact contains itself.

It is not that logic—as conceived by human thought—is at the root of everything. Instead, there are a multitude of possible formal systems, some picked by the natural world, some picked by historical developments in mathematics, but most out there uninvestigated.

He was always a little too original to be in the mainstream, with the result that there are few fields where he is widely known.

As a hobby he worked on quantum physics and number theory.

“The most efficient way to raise an atheist kid is to have a priest for a father.”

Hardy gives me the impression of a good schoolboy who never fully grew up. He seemed to like living in a structured environment, concentrating on his math exercises, and displaying cleverness whenever he could.

Ramanujan was in some fundamental sense an experimental mathematician: going out into the universe of mathematical possibilities and doing calculations to find interesting and significant facts—and only then building theories based on them.

Ramanujan had intuition and aesthetic criteria that in some sense captured some of the deeper principles we now know, even if he couldn’t express them directly.

I think the first step to following in his footsteps is just to be adventurous: not to stay in the comfort of well-established mathematical theories, but instead to go out into the wider mathematical universe and start finding—experimentally—what’s true.

My own feeling—as someone who’s getting older myself—is that at least up to my age, many aspects of scientific and technical productivity actually steadily increase. For a start, it really helps to know more—and certainly a lot of my best ideas have come from making connections between things I’ve learned decades apart. It also helps to have more experience and intuition about how things will work out. And if one has earlier successes, those can help provide the confidence to move forward more definitively, without second guessing. Of course, one must maintain the constitution to focus with enough intensity—and be able to concentrate for long enough— to think through complex things.

With his interest in languages, coding and space, it was inevitable that Sol would get involved in the question of communications with extraterrestrials.

…to date Sol’s algorithm has been used at least an octillion times. Is it really the most-used mathematical algorithm idea in history? I think so.