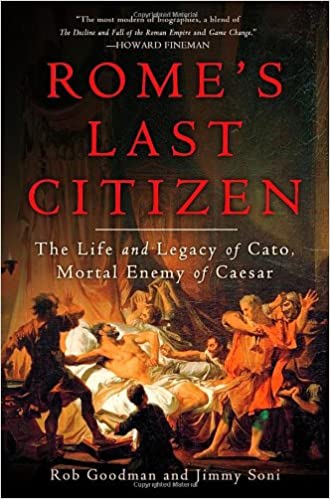 The Life and Legacy of Cato, Mortal Enemy of Caesar

I picked of this book after reading Goodman’s and Soni’s latest biography “A Mind at Play” that tells the story fo Claude Shannon, one of the greatest minds in the 20th century. I enjoyed it very much. Many historical notes were already familiar to me since we studied this period very thoroughly in Italian school.

Overall, Cato comes across as a strange character, stoic on some ways, very much flawed as any other human in other ways.

What follows are a list of highlights from the book that resonated with me. There are many notes related to Politics, Socialism, Populism, etc. since they are still relevant today and many things are similar to current events in Venezuela.

Tiberius proposed to remedy Rome’s wealth gap by capping the holdings of the rich and distributing public lands to the urban poor.

Communism is not a new concept.

What Rome’s conservatives took from the Gracchan years was a conviction of how easily the masses could be bribed – the revelation that their loyalty belonged not to the state, but to the highest bidder.

From Athens, Rome carried home not just a literature, but a conviction that public speaking should be at the center of learning.

“Ungrateful fatherland you will not even have my bones”.

Inscription in Scipio’s tomb. He was the one that defeated Hannibal. Demanded respect for this but was accused of corruption during his late years.

Understand this: nobody owe us anything and people will most likely be ungrateful. Don’t expect anything from anybody.

The ancients were, almost by definition, purer, wiser, braver.

In a world without academic disciplines as we know them, philosophy was politics and logic, ethics and science.

The study of philosophy encompassed a lot of modern disciplines. Man tried to elevate himself through study and action.

Te begin with, the Stoics were as hard, as uncompromising, as Cato the Younger aspired to be. They taught: Whether you were a foot underwater or a fathom, you were still drowning. There was no more-or-less good, no more-or-less bad. All virtues were one and the same virtue; all vices were the same vice. Your lungs were either full of water or of air. In that austere scheme, the vast diversity of characters and types were reducible to two: the sage and the fool. Fools were universal. Even practicing Stoics lumped themselves in as equally foolish, equally mired in error and sin, and equally miserable. Of sages, who alone were happy, Socrates himself was perhaps the only known case.

By the time of their marriage, women had established a foothold of legal and social independence. A woman could own property, divorce her husband, and even sue for repayment of her dowry.

How is it then that after the Romans things moved back?

“We rule the world and our wives rule us.”

For a budding Stoic, whose self-mastery was still a work in progress, there was no better place to seek out mental and bodily hardship than in the mud of an army camp, in the long night watches, and in the fear that attended combat, even combat against inferiors.

“It would not be wrong to describe their drills as bloodless battles, and their battles as bloody drills”

In Roman public life, one day’s hero was the next day’s tyrant.

Veneration of the old pushed Roman practicality to the brink. Generation after generation, the Romans kept up their oldest structures at any cost, even when doing so ran up against the realities of managing a swelling city – or administering an empire.

So longs as Romans were willing to enforce the laws and abide by them, the state could prosper, with debts and taxes paid on time and corruption held back.

Cato hadn’t brought any charges against Silanus – because he was family.

“Stick to the point, the words will come.”

Cato was confirming the common Roman whisper: that he was not the man of moderation he styled himself but essentially a man of excess who struggled, with varying success, to hold himself in check from day to day.

Cato had overlooked in kin the same behavior he condemned in others.

“Accounts of the dead run as high as three hundred thousand”

Neither man wanted to fight – but neither wanted to give the impression of being willing to concede first. And so the two generals were left in an awkward dance: sending offers of peace they wouldn’t accept, and building armies they hoped never to use.

Apatheia, the Stoics called it: contentment even when half dead of thirst. This was the dry landscape of Stoicism, and the place where Cato’s failings ceased to matter.

To the Stoic, fate was not less fate for being unfair.

“Trust time,” Cato insisted, “which withers away all the vigor that is the strength of tyranny.” But he had no power to enforce that advice: He had signed that power away.

…He reached down to where the pain was, beneath the stitches and into the wound, and tore himself open.

Cato committed suicide by stabbing himself. He was “saved” by his family but was determined to end his life no matter how.

“…victory need not imply virtue, that right doest not always make might.”

He is the kind of man that every statesman aspires to be: physically tough, intellectually brave, unflinchingly principled, beloved despite his warts.

The Cambridge companion to the Stoics – Brad Inwood (2003)