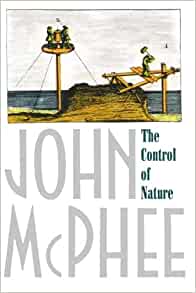 The Control Of Nature By John McPhee

The third, and final, essay, Los Angeles against the Mountains, describes the fight that the fight of the citizens of Southern California against nature. The focus is on the debris flows that slide down the mountains after heavy rains and the subsequent fires that hit most of California during the dry season in the fall. This was the essay I related to the most. Not only I live in California and understand all the challenges that it means to live here, but the descriptions of the debris flows brought sad memories of the Vargas tragedy where, after weeks of continuous rain, the mountains slid towards the sea killing and burying everything in their path.

Southern Louisiana exists in its present form because the Mississippi River has jumped here and there within an arc about two hundred miles wide, like a pianist with one hand—frequently and radically changing course, surging over the left or the right bank to go off in utterly new directions.

After the Corps dammed Old River, in 1963, the engineers could not just walk away, like roofers who had fixed a leak. In the early planning stages, they had considered doing that, but there were certain effects they could not overlook. The Atchafalaya, after all, was a distributary of the Mississippi—the major one, and, as it happened, the only one worth mentioning that the Corps had not already plugged. In time of thundering flood, the Atchafalaya was useful as a safety valve, to relieve a good deal of pressure and help keep New Orleans from ending up in Yucatán.

His voice had the sound of water over rock. In pitch, it was lower than a helicon tuba.

"Whenever you try to control nature, you’ve got one strike against you. - LeRoy Dugas, Old River manager

“She has nothing but time”

In 1735, New Orleans went under—and again in 1785. The intervals—like those between earthquakes in San Francisco—where generally long enough to allow the people to build up a false sense of security.

Who will win as this slow-motion confrontation between humankind and nature goes on? No one really knows. But after watching Mt. St. Helens and listening to the guesses about its performance, if we had to bet, we would be on the river.

Viewed from five or six thousand feet in the air, the structures at Old river inspire less confidence than they do up close. They seem temporary, fragile, vastly outmatched by the natural world—a lesion in the side of the Mississippi butterflied with surgical tape.

This is planned chaos. The more planning they do, the more chaotic it is. Nobody know exactly where it’s going to end.‍

As lava moves, under the air, it develops a skin of glass that is broken and rebroken by the motion of the liquid below, so that it clinks and tinkles, and crackles like a campfire, which, in a fantastic sense, it resembles.

In Iceland, Norwegian chest drops—all the high hard ones from Jonny Walkersson to Jack Danielsson to Lambeater gin—are legal, and are sold over the counter at government store. Beer, however, is prohibited, in the interest of the national health.

If he thought we was doing the right thing, he did it.

This was Iceland, after all, where the earth is full of adjustments, like a settling stomach.

“There were those who, in their fear of death, invoked it. Many lifted up their hands to the gods, but a great number believed there were no gods, and that this night was to be the world’s last, eternal one”. Those sentences were written by Pliny the Younger nephew of the admiral [Pliny the Elder who died during the eruption]. To him the science of volcanology is indebted for its earliest preserved descriptions.

The people of Vestmannaeyjar, who were emblematic of the people of Iceland, had lived since the year of settlement in the endless presence of disaster. They had obviously not been dissuaded by it, and had learned to subdue their residual fears. No matter how overwhelming a situation might seem to be, if there was any possibility of fighting back they had done so, and this seemed to have produced evolutionary effects, expressed in the battle against the lava…

In Iceland, three dates that everybody knows are 874, when settlement first occurred, 930, when the parliament was founded, and 1000, when a great and prolonged debated resulted in the nation’s accepting Christianity. During the deliberations, word reached the parliament that red-hot lava was advancing toward the farm of a prominent and influential Christian. To the heathens, this was a sign. One of them said, “The gods are angry.” The opposition replied, “Then what angered the gods when the lava we are standing on was flowing?”

“With each day that passes, it will be shorter by one day”

Here began a sequence of events—as I count them, four—which occurred across a period of two months and basically influenced the future configuration of the island. They resulted in deliverance and destruction, on a large scale. They all involved human intervention, with effects that affected other effects and were ultimately so imponderable that no one could assign to people or to nature an unchallengeable ratio of triumph to defeat.‍

The safest way to approach lava is to have another person with you and he goes first.

In Sicily in 1669, when lava appeared on the south slopes of Etna, citizens of Catania went up the mountain with picks and axes to break the crust on one side of the flow and cause it to migrate toward the city of Paterno. Five hundred Paternesi cam out shooting. This led to a royal decree: Henceforth, no one would molest lava.

Hawaiians had lived with eruptions throughout Hawaiian history, and their primary way of dealing with the problem was through votive offerings. To this day, one sees strewn flowers at the edge of active craters, flowers in vases, offerings of tobacco, of food , and, most of all, of gin. The offerings are ther to placate an irritable deity whose dark humors are expressed as earthquakes and whose rage takes form as molten fire.

Iceland is the geological chocolate shop of this minor planet.

In 1783, a fissure opened in south-central Iceland that was fifteen miles long, starting an eruption that started eight months. Icelanders refer to it as the Fires of Shakta, which brought on the Hardship of the Blue Cloud. This—the Moduhardindi—was a haze that spread all over the Northern Hemisphere. The haze included large amounts of fluorine, and it affected sheep and people. There was hydrofluoric, hydrochloric, sulfuric rain. The sheep rotted alive. The people weakened. A third of the population died.‍

The south of Iceland, it can all blow up. Yes. It’s like living in San Francisco.

The true extent of the victory will never be known—the role of luck being unassessable, the effects of intervention being ultimately incalculable, and the assertion that people can stop a volcano being hubris enough to provoke another eruption.

LOS ANGELES AGAINST THE MOUNTAINS

A metropolis that exists in a semidesert, imports water three hundred miles, has inveterate flash floods, is at the grinding edges of two tectonic plates, and has a microclimate tenacious of noxious oxides will have its priorities among the aspects of its environment that it attempts to control.

The setting up of a debris flow is a little like the charging of an eighteenth-century muzzle-loader: the ramrod, the powder, the wadding, the shot. Nothing much would happen in the absence of any one component. In sequence and proportion each had to be correct.

In the long dry season, and particularly in the fall, air flows southwest toward Los Angeles from the Colorado Plateau and the Basin and Range. Extremely low in moisture, it comes out of the canyon lands and crosses the Mojave Desert. As it drops in altitude, it compresses, becoming even dryer and hotter. It advances in gusts. This is the wind that is sometimes called the foehn. The fire wind. The devil wind. In Los Angeles, it is known as Santa Ana.

The burns of prehistory, in their natural mosaic, were smaller than the ones today. With cleared fire lanes, chemical retardants, and other means of suppressing what is not beyond control, people have conserved fuel in large acreages. When the inevitable fires come, they burn hotter, higher, faster than they ever did in a state of unhindered nature.

[We seem to not learn from the lessons of history. Even today in 2020 the fire-prevention practices rely too much on intervention and precuation. Nature always gets what she wants.]

Mystically, unnervingly, the heaviest downpours always occur on the watersheds most recently burned. Why ths is so is a question that has not been answered. Meteorologists and hydrologists speculate about ash-particle nuclei and heat reflection, but they don’t know.