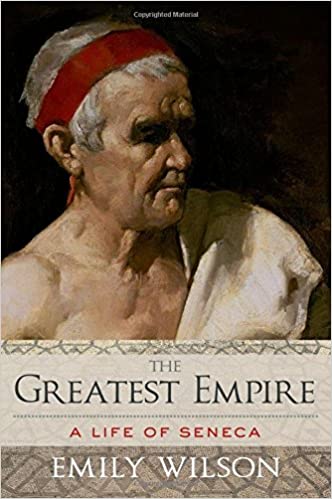 The Greatest Empire By Emily Wilson

Seneca is one of the most famous stoic philosophers of all times. Not because he was perfect and embodied the “Stoic ideal” but, quite the opposite, because he was a flawed man with his own struggles and flaws.

This book does a superb job at describing him from all angles. It depicts him as a man with many issues and contradictions (remember he was an advisor to Nero, one of the most brutal and inhuman Roman emperors). It does so by matching important events to some of this writings, but in doing so, some times the book feels slow and filled with some unnecessary detail.

Overall though, the story seems very accurate and real. It helped remember many events of Roman history that I had studied in high school and also helped bring back to mind old memories of philosophical discussions with Michele Rozzi, my wonderful History and Philosophy professor.

As usual, below are the passages I highlighted.

For another Stoic character check Rome’s Last Citizen, the biography of Cato.

The story of Seneca’s life raises a broader, indeed universal question, which has particular resonance in our time: What counts as success? This is an issue that runs through all Seneca’s literary output. He constantly stages conflicts between different models of the good or successful life.

Seneca imagines death as the easy exit that is always available: “I have made nothing easier than dying”, declares God in Seneca’s essay On Providence. He insists that we ought always to be able to rise above fortune, both good and bad, and that we can, through our own strength of will, overcome any challenge with ease: “It is not because things are difficult that we don’t dare do them; our lack of daring makes them difficult”.

The Stoic ideal of constancy (constantia, on which Seneca wrote a highly influential essay) is the wise man’s ability to be firm, always the same, always stable, even as the world changes all around him.

The Stoics believe that humans are entirely capable of understanding the universe, and also that human happiness depends on our ability to think properly. The ideal is to align our own minds with the rational will of the universe.

He (Seneca) deveveloped a lifelong love for, and interest in, gardening and viticulture, and grew vines on his own Italian estates in later years.

A wish come true can also be a fear come true, and Seneca’s father recognize the danger clearly at the start of his career. He wans his sons of the possibility that success, in politics at least, might come at a terrible cost of lost moral or social identity.

…he instantly became to live his own life in defiance of the luxury-loving consumer culture that was an essential strand among the Roman elite of hits time.

[This shows how history is cyclic. The same can apply to us.]

…it is easier for the will to give things up completely than to use them moderately. [“The only thing to do in moderation is moderation…” Half measure don’t work]

The experience of living with chronic illness must have done much to inform Seneca’s constant sense that death was always just around the corner. If he did not die at the hands of an emperor or an assassin, his lungs would finish him off. Every breath he took was a mark of his limited time on earth.

The best prescription for sickness, he tells us, is to despise death. That will cure all other human ailments. If you can stop being afraid of death, nothing else need bother you. We may remember, however, that Seneca initially described his wish to kill himself rather than suffer from his sickness. It is hard to see how despising death can be much help, if death itself is longed for but unavailable.

Seneca’s years under Tiberius gave him a good glimpse of how important it was for an emperor to be able to be generous and merciful to his subjects – topics on which he insisted in his public advice to Nero. They also gave him a clear sense of the dangers involved in an advisor or imperial servant trying to become more powerful than the emperor, as Sejanus had done.

Seneca followed the standard Stoic line instead, which was that love between the sexes was not a source of delusion and frustration but rather a natural and spiritual necessity, which should be founded on reason, not passion.

Anger: “No plague has been more costly to the human race”

The Stoics categorized the bad kinds of emotion into four general types: pleasure, pain, desire, and fear. Excessive emotions of these types are, they thought, the most important reason why people may fail to achieve appropriate spiritual tranquility.

“Let them have as long as they fear”: oderint, dum timeant. – Caligula

…advises his readers to seek out the company of those with whom they can be their best selves. Hot-tempered people – and Seneca’s ward would have fir the category – are advised to soothe themselves with poetry, history, and music.

I examine my whole day, and I retrace my actions and my words. I hide nothing from myself: I skip nothing. Indeed, why should I be frightened of my mistakes, when I can tell myself, “See that you don’t do that any more. I forgive you this time”.

The temptation of consumerism, for Seneca, is that impressive possessions allow one to impress other people. We have an insatiable desire for more wealth, not because these objects are desirable in themselves, but because we want to seem admirable in the eyes of others.

“The practice of trying to become health is worth praising, regardless of whether it works. Surely it isn’t surprising if people who set off on the steep path don’t reach the very top. If you’re a man, look up to those who are attempting great things even if they fall”

The real question is whether one can enjoy wealth without feeling in the least bit upset if it should ever go away: “If my wealth goes away, it takes with it nothing but itself”. “To sum up: my wealth is mine; you belong to yours”.

..the wise man will not be dependent on his wealth for happiness: he should be able, like the addressee of Kipling’s poem “If”, to meet both fortune and disaster “and treat those two imposters just the same”.

“So I don’t live one way and talk another”, says the wise man; “I talk one way and you hear another. You don’t even ask what my words mean”.

…why compromise oneself if safety is never guaranteed? “Why should one humiliate oneself for no reason, and then die like a slave, when it’s possible to pay the debt to nature like a free man?”

“The unexamined life is not worth living by a human being”

“He is a great man who uses earthenware dishes as if they were silver; but he is equally great who uses silver as if it were earthenware”. His goal was not poverty or even voluntary simplicity, but rather, peace of mind; he seeks ways to limit the psychological damage cause to reach people by wealth. Living at subsistence level, he acknowledges, is simply “what many thousands of slaves and many thousands of poor folks do all the time.” Rich people should emulate them, not so that they can see how hard their lives are, but in order to see how easy it is to bear.

By living below one’s means, one can realize that wealth is less necessary than one might otherwise think. Voluntary poverty enables the rich to stay rich, but with a greater feeling of inner peace.

We die every day. You see, every day a littler bit of our life is taken away from us, and even at the moment we are growing, our life is decaying . We lose our infancy, then childhood, then adolescence. Even up to yesterday, all past time is gone; even this day that we are spending now we share with death. It’s not the last drop that empties the water-clock, but whatever has flowed out before.

“money never makes on rich”; true wealth comes from being satisfied with enough. “Enough is never too little”.

On festival days, for example, Seneca suggest that the hardest but wisest way is not to avoid the crowds of merrymakers but to join in with moderation, setting an example of abstinent behavior even in the midst of excess.

Paul was deeply influenced by Stoic philosophy, if not directly by Seneca. He borrowed the notions of indifferent things, of what is properly one’s own, the ideal of freedom from passion, and the paradoxical notion of freedom through slavery, fairly directly from the Stoics.

Seneca’s difficult negotiations between interior and exterior, and between center and periphery, have a strikingly modern feel. We may well wonder whether the notion that only the truly virtuous person can be happy is either true of helpful, politically or ethically. But even Stoic-skeptics can acknowledge the continuing fascination of Seneca’s contradictory psychology, lurid life story, and complex, paradoxical, rich literary work.

Deep Work By Cal Newport
The Power Of Habit By Charles Duhigg
Show Your Work by Austin Kleon: Summary and Notes