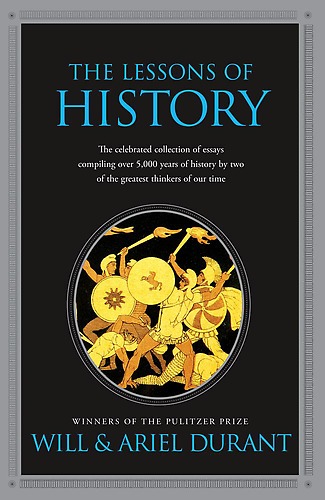 The Lessons of History By Will and Ariel Durant

This book felt like a sprint through history. It left me wanting to read more history books!

Geography is the matrix of history, its nourishing mother and disciplining home. Its rivers, lakes, oases, and oceans draw settler to their shores, for water is the life of organisms and towns, and offers inexpensive roads for transport and trade.

The influence of geographic factors diminishes as technology grows. The character and contour of a terrain may offer opportunities for agriculture, mining, or trade, but only the imagination and initiative of leaders, and the hardy industry of followers, can transform the possibilities into fact; and only a similar combination (as in Israel today) can make a culture take form over a thousand natural obstacles.

Man, not the earth, makes civilization.

“Racial” antipathies have some roots in ethnic origin, but they are also generated, perhaps predominantly, by differences of acquired culture – of language, dress, habits, morals, or religion. There is no cure for such antipathies except a broadened education.

Out of every hundred new ideas, ninety-nine or more will probably be inferior to the traditional response which they propose to replace. No one man, however brilliant or well-informed, can come in one lifetime to such fullness of understanding as to safely judge and dismiss the customs or institutions of his society, for there are the wisdom of generations after centuries of experiment in the laboratory of history.

In every age men have been dishonest and governments have been corrupt; probably less now than generally before.

Democracy is the most difficult of all forms of government, since it requires the widest spread of intelligence, and we forgot to make ourselves intelligent when we made ourselves sovereign. Education has spread, but intelligence is perpetually retarded by the fertility of the simple.

War is one of the constants of history, and has not diminished with civilization or democracy.

“Polemos pater panton,” said Heracleitus; war, or competition is the father of all things, the potent source of ideas, inventions, institutions, and states.

History repeats itself, but only in outline and in the large.

History is, above all else, the creation and recording of that heritage; progress is its increasing abundance, preservation, transmission, and use.

How to Live on Twenty Four Hours a Day By Arnold Bennett
The Mythical Man Month By Frederick P. Brooks, Jr.
The Five Elements of Effective Thinking By Edward B. Bruger, Michael Starbird