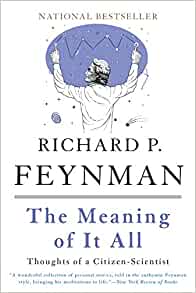 The Meaning Of It All By Richard P. Feynman

Categories
Permanent Beta
Marketing
Internet
Published or Updated on
May 5, 2021

This little book is a transcription of a series of lectures Feynman gave at the University of Washington in Seattle. It is a nice and quick read in it’s entirety.

As with everything that has do to with Feynman, the book is funny, he had such a great sense of humour and yet he could get across some important ideas and principles for everybody to ponder and think through.

Throughout the lectures Feynman tries to convey the message that the world would be better of by being more scientific. He argues and explains that while science doesn’t have all the answers, it doesn’t hold the keys to the ultimate truth, it can be used to make the world a better place and it can help us live better and more fruitful lives.

What is remarkable about his thesis and statements is that most of what he said in 1967, forty years ago, is still very much relevant today. You would think that by now - we are in 2017 after all - we would be living in a scientific age. But, despite all the scientific and technological advances that we are seeing, and the ever increasing speed at which these advances are happening, the world still has a lot to learn.

Is science of any value? I think a power to do something is of value. Whether the result is a good thing or a bad thing depends on how it is used, but the power is a value.

“..To keep trying new solutions is the way to do everything” - Richard Feynman

“What looks still to our crude eyes is a wild and dynamic dance.” - Richard Feynman

So this piece of dirt waits four and a half billion years and evolves and changes and now a strange creature stands here with instruments and talks to the strange creatures in the audience. What a wonderful world!

Another very important technical point is that the more specific a rule is, the more interesting it is.

Knowledge is of no real value is all you can tell me if what happened yesterday. It is necessary to tell what while happen tomorrow if you do something – not only necessary, but fun. Only you must be willing to stick your neck out.

You have to permit the possibility that you do not have it exactly right. Otherwise, if you have made up your mind already, you might not solve it.

The government of the United States was developed under the idea that nobody knew how to make a government, or how to govern. The result is to invent a system to govern when you don’t know how. And the way to arrange it is to permit a system, like we have, wherein new ideas can be developed and tried out and thrown away.

I think I can illustrate one unscientific aspect of the world which would be probably very much better is it were more scientific. It has to do with politics. Suppose two politicians are running for president, and one goes through the farm section and is asked, “What are you going to do about the farm question?” And he know right away – bang, bang, bang. Now, he goes to the next campaigner who comes through. “What are you going to do about the farm question?” “Well, I don’t know. I used to be a general, and I don’t know anything about farming. But it seems to me it must be a very difficult problem, because for twelve, fifteen, twenty years people have been struggling with it, and people say that they know how to solve the farm problem. And it must be a hard problem. So the way that I intend to solve the farm problem is to gather around me a lot of people who know something about it, to look at all the experience that we have had with this problem before, to take a certain amount of time at it, and then to come to some conclusion in a reasonable way about it…”

Now, such a man would never get anywhere in this country, I think.

Prejudices have a tendency to make it harder to prove something, but when something exists, it can nevertheless often lift itself out.

The problem is not what is possible. That’s not the problem. The problem is what is probable, what is happening. It does no good to demonstrate again and again that you can’t disprove that this could be a flying saucer.

..that’s a general principle in physics theories: no matter what a guy thinks of , it’s almost always false.

Everything has to be checked out very carefully. Otherwise you become one of these people who believes all kinds of crazy stuff and don’t understand the world they’re in. Nobody understands the world they are in, but some people are better off at it than others.