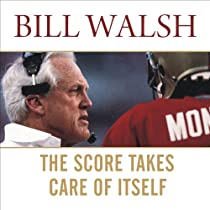 The Score Takes Care of Itself By Bill Walsh

The Standard of Performance

At the core of Walsh’ philosophy was his “Standard of Performance”, a set of rules that he developed and honed during the first 25 years of his career. This standard became his North Start, within it everything was allowed. Outside it, nothing.

He summarized the standard as follows (emphasis mine):

Exhibit a ferocious and intelligently applied work ethic directed at continual improvement; demonstrate respect for each person in the organization and the work he or she does; be deeply committed to learning and teaching, which means increasing my own expertise; be fair; demonstrate character; honor the direct connection between details and improvement, and relentlessly seek the latter; show self-control, especially where it counts most—under pressure; demonstrate and prize loyalty; use positive language and have a positive attitude; take pride in my effort as an entity separate from the result of that effort; be willing to go the extra distance for the organization; deal appropriately with victory and defeat, adulation and humiliation (don’t get crazy with victory nor dysfunctional with loss); promote internal communication that is both open and substantive (especially under stress); seek poise in my.self and those I lead; put the team’s welfare and priorities ahead of my own; maintain an ongoing level of concentration and focus that is abnormally high; and make sacrifice and commitment their organization’s trademark.

The Standard of Performance became famous after Bill applied it and transformed the San Francisco 49ers from a losing organization to one of the best professional sports organizations of his time. Across the book Bill Walsh comes across as a very disciplined but thoughtful and inspiring leader. He demanded and inspired excellence.

Bill’s philosophy was bigger than football. The principles he used and applied around his Standard of Performance can be applied in other professions to create an environment of excellence and great leadership.

In fact, this is what he taught at Stanford Business School [TKK link] once he retired from football.

He believed that great leaders were not egotistical and always put the interest of the organization or team above their own. Bill’s ideal of a great leader is similar to the “Level 5” leaders that Jim Collins describes in Good to Great. In Bill’s words, a great leader is one that “creates a self-sustaining organization able to operate at the highest levels even when he or she leaves”.

You have to know where you’re going to come out before you go in.

Bill’s philosophy around planning can be summarized as “leave nothing to chance”. He was a ruthless planner. Throughout his tenure the 49ers had plans for everything. They would study games and obsess over plays and details. They planned each game down to a few seconds constructing huge playbooks to guide them through any surprise that would arise.

The goal of obsessing over planning was for Bill the only way to be ready and prepared. He didn’t like to leave anything to chance. His was a very stoic philosophy: focus on what you can control and the score will take care of itself.

The more you know, the higher you go“. To advance in any profession, I believe it is imperative to understand all aspects of that profession, not just one particular area: Only expertise make you an expert.

As described in his Standard of Performance, Bill knew that great leaders are great learners and also great teachers. He exemplified this. He wanted to be seen, above all, as a good teacher. He always prepared and made sure that he could communicate clearly.

Quality collaboration is only possible in the presence of quality [[communication]]; that is, the free-flowing and robust exchange of information, ideas, and opinions. And “having big ears”—the skill of being a great listener—is the first law of good communication. (The second law is “When you’re not listening, ask good questions”)

Key to Bill’s philosophy of excellence was to treat everyone fairly. This was unorthodox in his time. Back then, coaches were used to treat players like animals and squeeze every little bit of their energy during training and during games.

In contract, Bill developed a philosophy rooted in camaraderie and fairness. Everyone in the organization would be treated fairly and with respect and would treat others the same way. Nobody was above anybody else.

This also served him to instill a sense of belonging in every member of the organization. From receptionists to players and coaches, everybody was proud of being a 49er. Their work was important and played a role in the team’s overall success.

We need to live what we preach. Bill Walsh trusted actions more than words.

By leading the 49ers in their path to excellence he showed to the world of professional sports and organizations what is possible by applying a Standard of Performance. To this day, there is no American Football organization with track record as incredible as the San Francisco 49ers that Bill Walsh helped create.

According to his players and coaches, Bill had lists and checklists for everything. This was part of his obsession for planning and excellence.

Here are a few that stood out from the book:

FIVE DOs FOR GETTING BACK INTO THE GAME

Lessons from the Bill Walsh Offense

Be a Leader —Twelve Habits plus one

In the end, the book is also about Football and the NFL of the 1970s and 1980s. I learned a few things about the sport as a whole. Below are some things that I learned and surprised me: