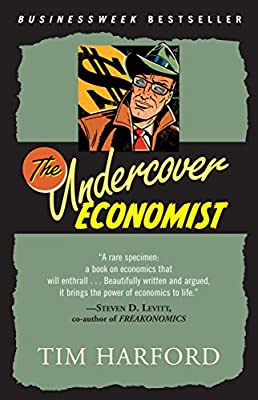 The Undercover Economist By Tim Harford

I picked up this book in an effort to read something different from what I usually read. Been skeptical of Economics as a discipline, let alone a Science, I was trying to understand a bit more about how Economists think.

This book attempts to introduce some core principles of Economics using day-to-day examples. For example, it describes the law of offer and demand by explaining why coffee is usually overpriced. While this approach was nice, the style of the author didn’t click with me. I found most of the book boring and not really very engaging.

The simplification of economic models have been known to lead economists astray.

The people who are most harmed by new immigration are the previous group of immigrants, who find their wages nailed to the floor.

Whole foods is not expensive in the sense that it charges more for the same goods. It is expensive because of where its price-targeting policies are focused: prices for the basics may be competitive, but the selection in Whole Foods is aimed at customers with a different view of what “basics” are.

The idea of an externality charge is not to discourage everyone from doing anything that might inconvenience anyone else; it is to get them to take into account the inconvenience they cause to others.

If you decide to wait for the bus rather than flagging down a cab, you are implicitly putting a value on your time.

[Time is the most important thing we have and we should use it wisely. Naval has an idea for this, “aspirational hourly rate”.]

“Never ascribe to conspiracy that which is adequately explained by incompetence.” - Napoleon

Not all environmental problems will be automatically solved by free trade. One example is the tendency to monoculture: growing only rice, only coffee, or only wheat. This lack of biodiversity renders crops more vulnerable to pests and to fluctuations in the weather.