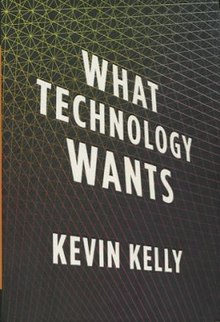 What Technology Wants By Kevin Kelly

I first learned about Kevin Kelly on the [Tim Ferriss podcast]. The book is a treatise, almost philosophical, about how Kelly sees technology and humanity as a whole.

As the title, suggests, Kelly tries to understand what is technology, where it is going, and why. What does it want? The whole book is an almost philosophical treatise. It is packed with historical and scientific anecdotes that will make you think a lot.

The key idea though is the idea of the technium, a term coined by Kelly that describes the set of humanity’s creations: culture, history, technologies.

How we got here? The Universe has established physical rules that limit the number of possibilities. So, in a sense, how we got here was inevitable, the rules of the game are already established. Kelly argues that if we replay history back we will see the same things happen again, at least at a macro scale: Einstein might not be Einstein in another history but the principles of Relativity would have been discovered nonetheless.

Kelly sees the technium as a complex system with a life of its own. This is a compelling idea especially when you see the rate of progress of humanity. In just a minuscule fraction of the history of the Universe, we’ve evolved from stardust to almost cyborgs.

Online networks unleashed passions, compounded creativity, amplified generosity. At the very cultural moment when pundits declared that writing was dead, millions began writing online more than they ever had written before. Exactly when the experts declared people would only bowl alone, millions began to gather together in large numbers.

The Internet has given us [[optionality]]. As the world moves online we have more choices. The options are infinite. This is a double-edged sword. With the many benefits also come a lot of risks.

I continue to keep the cornucopia of technology at arm’s length so that I can more easily remember who I am.

Use technology but not be used by it. We must live by design not by default as [[Greg McKeown]] from [[Essentialism]] says.

However you define life, its essence does not reside in material forms like DNA, tissue, or flesh, but in the intangible organization of the energy and information contained in those material forms.

While Sapiens’ innovation allowed them to prosper in many new climates, the cold and its unique ecology especially drove innovation.

[[Obstacles]] lead the way. Humanity is in a constant battle against Nature and with Nature that is at the core of our very existence.

Instead of acquiring a larger brain, as the Neanderthals and Erectus did, Sapiens gained a rewired brain. Language altered the Neandertal-type mind and allowed Sapien minds for the first time to invent with purpose and deliberation.

[[Language]] is perhaps the single most important innovation in our evolution up to this point.

They had a varied menu of tubers, vegetables, fruit, and meat. Based on studies of bones and pollen in their trash, so did the early Sapiens.

When food is there, all work very hard. When it is not, no problem; they will sit around and talk while they are hungry. This very reasonable approach is often misread as tribal laziness, but it is in fact a logical strategy if you rely on the environment to store your food.

..when they spoke of shortages, or even hunger, they meant a shortage of meat, and a hunger for fat, and a distaste for periods of hunger.

A short life span is also extremely detrimental for a society as well. Without grandparents, it becomes exceedingly difficult to transmit knowledge —and knowledge of tool using— over time. Grandparents are the conduits of culture, and without them culture stagnates.

Within 20,000 years of the great march out of Africa, Sapiens helped exterminate 90 percent of the then-existing species of megafauna. Sapiens used innovations such as the bow and arrow, spear, and cliff stampedes to kill off the last mastodons, mammoths, moas, woolly rhinos, and giant camels —basically every large package of protein that walked on four legs.

A world without technology had enough to sustain survival but not enough to transcend it. Only when the mind, liberated by language and enabled by the technium, transcended the constraints of nature 50,000 years ago did great realms of possibility open up. There was a price to pay for this transcendence, but what we gained by this embrace was civilization and progress.

The extended human is the technium. Marshall McLuhan, among others, noted that clothes are people’s extended skin, wheels extended feet, camera and telescope extended eyes.

Unrelated parts end up as a tightly integrated system in a more evolved design. Most engines combined heat-producing pistons with a cooling radiator. But the clever air-cooled engine merges two ideas into one: The engine contains the pistons but also doubles as a radiator to dissipate the heat they generate. “In technology, combinatorial evolution is foremost, and routine”

No transition in technology has affected our species, or the world at large, more than the first one, the creation of language. Language enabled information to be stored in a memory greater than an individual’s recall. A language-based culture accumulated stories and oral wisdom to disseminate to future generations. The learning of individual, even if they died before reproducing, would be remembered. From a systems point of view, language enabled humans to adapt and transmit learning faster than genes.

Technologies are idea based, and culture is their memory.

“Exotropy” is the pseudo-scientific principle that life will expand indefinitely and in an orderly, progressive way throughout the entire universe by means of human intelligence and technology.

The atoms in our bodies were produced in the dust of a star. We are much older than we look.

Information is a signal of bits that makes a difference.

Discomfort is an investment.

Outside the reign of science and technology a growing population will collapse upon itself as it meets Malthusian limits. But inside the reign of science a growing population creates a positive feedback loop wherein more people participate in scientific innovation and purchase the results, driving more innovation, which brings better nutrition, more surplus, and more population, which feed the cycle further.

We address the problems of tomorrow not with today’s tools but with the tools of tomorrow. This is what we call progress.

Evolution is driven toward certain recurring and inevitable forms by two pressures:

Life, rather than being boundless and unlimited in every direction, is bounded and limited in many directions by the nature of matter itself.

“The laws of nature are rigged in favor of life”.

There are many indications that our neighborhood of the universe is biased toward the appearance of life. Our planet is just close enough to the sun to be warm but far away to not burn. Earth has a large nearby moon that slows down its rotation to lengthen the day and to stabilize it over the long term. Earth shares the sun with Jupiter, which as as a comet magnet. The ice of those captured comets may also have given Earth the oceans. Earth has a magnetic core, which generates a cosmic ray shield. It has the appropriate level of gravity to retain water and oxygen. It has a thin crust, which enables the churn of plate tectonics. Each of these variables seems to sit in a Goldilocks zone of not too little and not too much.

Despite life’s magnificent diversity, it is chiefly repeating, billions of billions of times, solutions that worked before.

If discovery is a lottery, the greatest discoverers buy lots of tickets.

An awful lot of the shape of your life is given to you and is beyond your control, but your freedom to choose within those givens is huge and significant. The course of your life within the constrains of your genes and environment is up to you.

“So, a major design feature of what is arguable the world’s most advanced transportation system was determined over two thousand years ago by the width of two horses’ arse”. More or less, this is how technology constrains itself over time.

[Nasa’s space shuttle rocket boosters are about 4’ 8.5" wide, the size of the railroad tracks. These in turn were determined in Roman times when they built roads for chariots pulled by two horses.]

Like personality, technology is shaped by a triad of forces. The primary driver is preordained development —what technology wants. The second driver is the influence of technological history, the gravity of the past, as in the way the size of a horse’s yoke determines the size of a space rocket. The third force is society’s collective free will in shaping the technium, or our choices.

The number of technologies to choose from so far exceeds our capacity to use them all that these days we define ourselves more by the technologies we don’t use than by those we do.

The greater the promise of an new technology, the greater its potential for harm as well.

The principle of constant engagement is called the Proactionary Principle. Because it emphasizes provisional assessment and constant correction, it is a deliberate counter-approach to the Precautionary Principle.

The proper response to a lousy idea is not to stop thinking. It is to come up with a better idea. Indeed, we should prefer a bad idea to no ideas at all, because a bad idea can at least be reformed, while not thinking offers no hope.

Danny Hillis, computer inventor, once confided that he believed that there’s good chance that 1,000 years from now computers might still be running programming code from today, say a UNIX kernel.

If you want to worry about something, don’t worry about the folks who are currently offline. They’ll stampede on faster than you think. Instead you should worry about what we are going to do when everyone is online.

How can technology make a person better? … by providing each person with chances. A change to excel at the unique mixture of talents he or she was born with, a chance to encounter new ideas and new minds, a chance to be different from his or her parents, a chance to create something his or her own.

Evolution, life, mind, and the technium are infinite games. Their games is to keep the game going. To keep all participants playing as long as possible. They do that, as all infinite games do, by playing around with the rules of play. The evolution is just that kind of play.