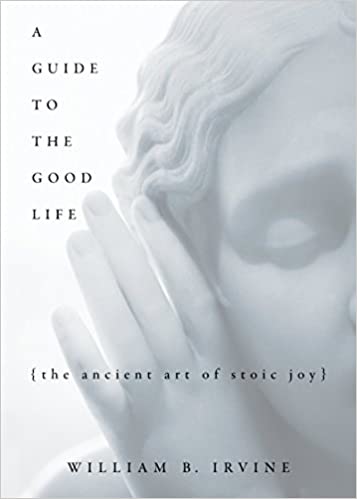 A Guide to the Good Life By William B. Irvine

Other than Marcus Aurelius’ “Meditations” and Seneca’s “Letters From a Stoic”, this is the first book that I read on Stoic living and I enjoyed it from start to finish. It is short and has a lot of good tips to incorporate Stoic living and thinking into your daily life.

if you lack a grand goal in living; you lack a coherent philosophy of life.
If you lack an effective strategy for attaining your goal, it is unlikely that you will attain it. Thus, the second component of a philosophy of life is a strategy for attaining your grand goal in living
" There is no profit in medicine if it does not expel the diseases of the body, so there is no profit in philosophy either, if it does not expel the suffering of the mind."

We are unlikely to have a good and meaningful life unless we can overcome our insatiability.

The Stoics fell somewhere between the Cyrenaics and the Cynics: They thought people should enjoy the good things life has to offer, including friendship and wealth, but only if hey did not cling to these good things.

“pay attention to your enemies, for they are the first to discover your mistakes.”

The pursuit of virtue results in a degree of tranquility, which in turn makes it easier for us to pursue virtue

“It is difficulties that show what men are. Consequently, when a difficulty befalls, remember that God, like a physical trainer, has matched you with a rugged young man.”

The adversities we experience count as “mere training,”

“The art of living is more like wrestling than dancing.”

We should periodically pause to reflect on the fact that we will not live forever and therefore that this day could be our last.

One reason children are capable of joy is because they take almost nothing for granted. To them, the world is wonderfully new and surprising. Not only that, but they aren’t yet sure how the world works: Perhaps the things they have today will mysteriously vanish tomorrow. It is hard for them to take something for granted when they can’t even count on its continued existence
By internalizing his goals in daily life, the Stoic is able to preserve his tranquility while dealing with things over which he has only partial control

We can spend our days wishing our circumstances were different, but if we allow ourselves to do this, we will spend our days in a state of dissatisfaction.

Stoic philosophy, while teaching us to be satisfied with whatever we’ve got, also counsels us to seek certain things in life. We should, for example, strive to become better people—to become virtuous in the ancient sense of the word

“the worse a man is, the less likely he is to accept constructive criticism.” Seneca

When someone says he wants to be perfectly straightforward with us, we should be on the lookout for a concealed dagger

And how are we to respond to an insult, if not with a counter-insult? One wonderful way, say the Stoics, is with humor.

Anger, says Seneca, is “brief insanity,” and the damage done by anger is enormous: “No plague has cost the human race more –  Seneca

“Laughter,” he says, “and a lot of it, is the right response to the things which drive us to tears! – Seneca

Possessing wealth, he observes, won’t enable us to live without sorrow and won’t console us in our old age.

Musonius says, that “the pleasure connected with food is undoubtedly the most difficult of all pleasures to combat.
“Live in accordance with nature. Epictetus

Anger, in other words, resembles a mosquito bite: It feels bad not to scratch a bite and feels good to scratch it. The problem with mosquito bites, of course, is that after you scratch one, you typically wish you hadn’t done so: The itch returns, intensified, and by scratching the bite, you increase the chance that it will become infected

The Mythical Man Month By Frederick P. Brooks, Jr.
The Score Takes Care of Itself By Bill Walsh
Made To Stick By Cheap and Dan Heath