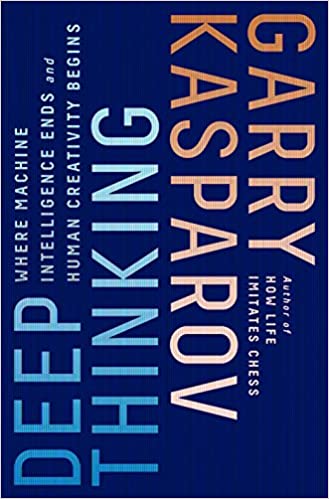 It’s fair to say that we have advanced futher in duplicating human thought than human movement.

Instead of a computer that thought and played chess like a human, with human creativity and intuition, they got one that played like a machine, systematically evaluating up to 200 million moves on the chess board per second and winning with brute number-crunching force.

Means that sometimes we take shortcuts. The brain is still too complicated to understand although we’re trying hard to reverse engineer it (see Kurzweil).

We are in a strange competition both with and against our own creations in more ways every day.

Is AI ethic, will we be replaced by AI or are we simply going to be enhanced by it?

It is also now widely accepted that this inexorable advance is something to celebrate, not fear, although it is usually two steps forward and one step back in this regard.

The worries about operatorless elevators were quite similar to the concerns we hear today about driverless cars.

History repeats itself. It is cyclic.

The cycle of automation, fear and eventual acceptance goes on.

If you program a machine, you know what it’s capable of. If the machine is programming itself, who knows what it might do?

We confuse performance – the ability of a machine to replicate or surpass the results of a human – with method, how those results are achieved.

Brains grown in petri dishes from stem cells are interesting for experiments, but without any input or output they could never be called minds.

Every profession will eventually feel this pressure, and it must, or else it will mean humanity has ceased to make progress.

If we feel like we are being surpassed by our own technology it’s because we aren’t pushing ourselves hard enough, aren’t being ambitious enough in our goals and dreams. Instead of worrying about what machines can do, we should worry more about what they still cannot do

Even the strongest chess programs in the world can’t explain any rationales behind their brilliant moves beyond elementary tactical sequences.

The same is true for AlphaGo, AlphaZero, etc. They learn to play faster and better than any human but can they really explain or teach us their “thought” process?

There is a shortage of biological evidence for this parallel beyond the metaphorical and it is a distraction from what makes human thinking so different from machine thinking.

Does it matter that none of it “matters” to the machine as long as it’s a useful tool?

The trajectory so far has been as follows: We create a machine that follows strict rules in order to imitate human performance. Its performance is poor and artificial. With generations of optimization and speed gains, performance improves. The next jump occurs when the programmers loose n the rules and allow the machine to figure out more things on its own, and to shape or even ignore the old rules. To become good at anything you have to know how to apply basic principles. To become great at it, you have to know when to violate those principles

In purely chess terms, a human versus machine game is asymmetrical warfare. Computers are very good at sharp tactics in complex positions while that is a human’s greatest weakness. Humans are very good at planning and what we call “positional play”, the strategic and structural considerations of quiet maneuvering.

Computers, like visiting aliens, don’t have common sense or any context that they aren’t told or cannot build.

This is the landscape of microchip architectures. Riding Moore’s Law for the past two decades without huge improvements in their line of thinking.

They (machines) don’t understand the human heuristic of practical chances, that when you are in deep trouble anyway, it’s often better to play an objectively inferior move that might confuse your opponent.

As with nearly every new technology, for every potential downside there were many upsides to the increasing strength and availability of strong chess machines.

There is always a tipping point at which they go from amusing diversions to essential tools. Then there comes another shift, when a tool becomes something more, something more powerful than even its creators had in mind.

A disembodied voice from your phone is one thing, but it’s another when it is emanating from a mechanical face and body. Regardless how you feel about them, there are going to be many more of them everywhere you go.

Adapting to circumstances is important, bu if you change your strategy all the time you don’t really have one.

I’m glad private advocates are on the job, especially regarding the powers of the government. I just think they are fighting a losing battle because the tech will continue to improve and because the people they are trying to protect won’t defend themselves.

There’s no doubt we’ve entered the “tracking” era. “Offline” data is the new gold. Too much money and gains to be made from making sense of people’s every move.

We all agree with this. The brain is by far the most energy efficient computer out there. At least for a while still.

In an ironic but inevitable turn, machines use opening books based on human knowledge, but increasingly Grandmasters employ engines to assist them with their opening preparation.

It’s wonderful if we can teach machines to think like we do, but why settle for thinking like a human if you can be a god?

Practice has shown that technology can greatly reduce that time by making training more efficient. Today’s teens, and increasingly preteens, accelerate the process by plugging into a digital fire hose of chess information and making full use of the superiority of the young mind to retain it all

Kids are capable of learning far more, far faster, than traditional education methods allow for. They are already doing it mostly on their own, living and playing in a far more complex environment than the one their parents grew up in.

While using your phone isn’t cheating in real life, you might develop a cognitive limp from an overreliance on a digital crutch. The goal must be sto use these powerful and objective tools not only to do better analysing and make better decision in the moment, but also to make us into better decision makers.

The willingness to keep trying new things - different methods, uncomfortable tasks - when you are already an expert at something is what separates good from great

In nearly any competitive endeavor, you have to be damned good before luck can be of any use to you at all

We are forever looking for answers without first making sure we understand the questions, or if they are the right ones.

“Computers are useless. They can only give you answers” – Pablo Picasso

Hard work is a talent. The ability to push yourself, to keep working, practicing, studying more than others is itself a talent. If anyone could do it, everyone would. As with any talent, it must be cultivated to blossom.

Reaching peak human performance requires maximizing every aspect of our abilities whenever we can, including preparation and training, not only while at the chessboard or in the boardroom

We often do our best thinking under pressure. Our senses are heightened and our intuition is activated in a way that is unique to stress and competition

A chess program can either be faster and dumber or slower and smarter. It’s a fascinating balancing act, and it took decades to create machines that were both smart enough and fast enough to challenge the world’s best human players.

In 1990, Ken Thompson of Belle was openly recommending the game Go as a more promising target for real advances in machine cognition.

Ken Thompson is incredible to me. We owe so much of modern computers to him and here we has, ahead of his time playing with chess playing machines and already thinking of the next problem to tackle!

While his conquerors basked in a year of glory, Botvinnik spent that time doing almost nothing but analyzing the matches he lost and preparing for the rematch.

To be the best in any competitive endeavor you have to hate losing more than you are afraid of it.

Our increasingly powerful machines give us the security to be more ambitious and better prepared, but we still have to make the choice to do it. Technology has lowered the barrier to entry in dozens of business sectors, which should prompt more experimentation and investment. Powerful models allow us to simulate the impact of change better than ever, lowering risk

Our emotions rule over our cognition in countless ways, many of which we cannot explain. Some players actually seem to play better when they are on the ropes.

“Intelligence is whatever machines haven’t done yet” – Larry Tesler