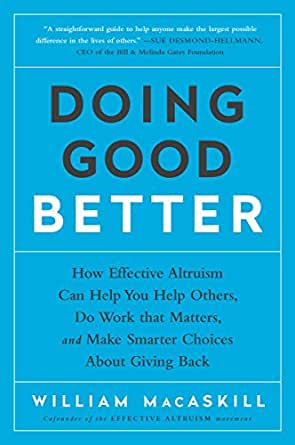 I learned about the Effective Altruism and 80,000 hours projects while I was a student at Oxford University. Since then I’ve always checked their sites for useful information about career progression and how to better help and contribute to causes that I care about.

This book is an introduction to the Effective Altruism mentality. It demystifies many commonly held myths about charities and donations by using scientific reasoning. I enjoyed it 100% and whenever I want to contribute to a charity that I care about I consult this book first!

Believe that by combining the heart and the head – by applying data and reason to altruistic acts – we can turn our good intentions into astonishingly good outcomes.

Being unreflective often means being ineffective.

We very often fail to think as carefully about helping others as we could, mistakenly believing that applying data and rationality to a charitable endeavor robs the act of virtue.

One difference between investing in a company and donating to a charity is that the charity world often lacks appropriate feedback mechanisms. Invest in a bad company, and you lose money; but give money to a bad charity, and you probably won’t hear about its failings. Buy a shirt that’s advertised as silk when it’s really polyester, and you’ll realize pretty quickly; but buy coffee that has a Fairtrade stamp on it, and you never know whether doing so helped people, harmed them, or did nothing.

Effective altruism is about asking, “How can I make the biggest difference I can?” and using evidence and careful reasoning to try to find an answer. It takes a scientific approach to doing good.

That we can’t solve all the problems in the world, doesn’t alter in any way the fact that, if we choose, we can transform the lives of thousands of people.

If we want to do as much as we can, we need to think about what the consequences of our actions will be. Moreover, we need to think about how our actions will turn into improvements to people’s lives. When making decisions, whether it’s volunteering, choosing a career, or deciding to buy “ethical” produce, we should therefore ask: How much does this activity cost, in terms of time or money? How many people does it affect? And, crucially: By how much does it improve people’s lives?

Ironically, the law of diminishing returns suggests that, if you feel a strong emotional reaction to a story and want to help, you should probably resist the inclination because there are probably many others like you who are also donating.

What matters is not who does good but whether good is done; and the measure of how much good you achieve is the difference between what happens as a result of your actions and what would have happened anyway.

The good I do is not a matter of the direct benefits I cause. Rather, it is the difference I make.

Earning to give means exactly what it sounds like: rather than trying to maximize the direct impact you have with your job, you instead try to increase your earnings so you can donate more, improving people’s lives through your giving rather than your day-to-day work.

The conventional advice is that if you want to make a difference you should work in the nonprofit or public sector or work in corporate social responsibility. Buy many people struggle to get a job, let alone a job in a specific sector. However, many more people have the option to work overtime in order to earn more, or to work harder in order to get a raise or promotion, or to move toward a higher-paying career, or just to live on less. By doing this, and being smart about where you give, almost anyone in rich countries can do a tremendous amount to help others.

… the mere fact that man-made climate change might be happening is enough to warrant action. As an analogy, suppose you have a carbon monoxide detector in your home that is a bit sensitive. It gives a false alarm every four out of five times if goes off but is otherwise accurate. You’re watching TV one evening, and the alarm goes off. What do you do? If you reason to yourself, “It’s probably a false alarm, so I won’t bother doing anything,” you’d be making a grave mistake. If it’s a false alarm but, to be safe, you turn off the boiler and open the windows, the worst that happens is you’ve made yourself chilly for an evening and hat to pause your favorite TV show unnecessarily. In contrast, if there really is a carbon monoxide and you do nothing, you may die.

On a per-person basis, US citizens emit more greenhouse gasses than any other large country, with the average American adult every year producing twenty-one metric tons of carbon dioxide equivalent.

One hot bath adds more to your carbon footprint than leaving your phone charger plugged for the whole year.

…what food you buy is much more important than whether that food is produced locally or internationally. Cutting out red meat and dairy for one day a week achieves a greater reduction in your carbon footprint than buying entirely locally based food.

[Is this true for booth industrial and pasture raised meat?]

The average American adult would have to spend $105 per year in order to offset all their carbon emissions. This is significant, but to most people it’s considerably less than it would cost to make large changes in lifestyle, such as not flying. This suggests that the easiest and most effective way to cut down your carbon footprint is simply to donate to Cool Earth.

The animal welfare argument is much stronger for some animals than for others, because some sort of animals produce involve a lot more suffering on the part of the animals than others. In fact, eliminating chicken and eggs from your diet removes the large majority of animal suffering from your diet. This is because of the conditions those animals are kept in, and the number of animals needed to provide a given number of calories.

You should think of your career as a work in progress. Rather than having a fixed career plan, try to have a career “model” – a set of provisional goals and hypotheses that you’re constantly revising as you get new evidence or opportunities.