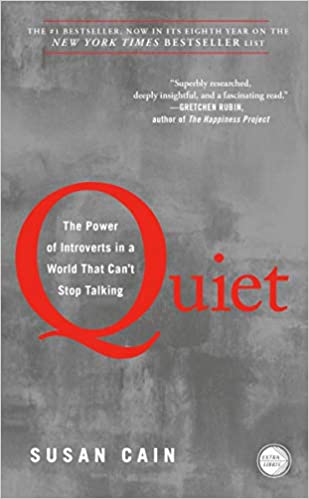 The Power of Introverts in a World That Can't Stop Talking

This is a book that lived to the expectations. Before picking it up I had read many good things on the internet, it was constantly mentioned in blocs and articles I read about performance psychology and self-help but I was skeptical as to how much there was to say about introverts and extroverts, especially since I consider myself an introvert.

I am glad that I picked the book up and read it cover to cover almost twice.

The book presents relevant research that has been conducted in the past decades about this subjects and does a very good job in distilling what introverts and extroverts are: two different personality traits that strive in different environments, that have different characteristics and different strengths and weaknesses but nonetheless two personality types that are can be found all over nature, not only in humans since they are both essential to the survival of a species.

The two personality types are not mutually exclusive as almost all of us have some degree of “extrovertism” and “introvertism”. By reading the book I understood more about myself, a person that likes quiet and empty spaces and that tries to escape crowds as soon as possible. I also understood about other people. I believe that I now understand better certain behaviors and traits that friends, family and even colleagues show.

Ultimately this Quiet is a book about human nature and psychology and if you haven’t read it yet you should.

We live with a value system that I call the Extrovert Ideal – the omnipresent belief that the ideal self is gregarious, alpha, and comfortable in the spotlight. The archetypal extrovert prefers action to contemplation risk-taking to heed-taking, certainty to doubt.

Introverts are drawn to the inner world of thought and feeling, said Jung, extroverts to the external life of people and activities. Introverts focus on the meaning they make of the events swirling around them; extroverts plunge into the events themselves. Introverts recharge their batteries by being alone; extroverts need to recharge when they don’t socialize enough.

Introverts often work more slowly and deliberately. They like to focus on one task at a time and van have mighty powers of concentration. They’re relatively immune to the lures of wealth of fame.

Introversion is a preference for environments that are not overstimulating.

He was more interested in listening and gathering information than in asserting his opinion or dominating a conversation.

Studies have shown that, indeed, introverts are more likely than extroverts to express intimate facts about themselves online that their family an friends would be surprised to read, to say that they can express the “real me” online, and to spend more time in certain kinds of online discussions.

introverts prefer to work independently, and solitude can be a catalyst to innovation.

Introversion “concentrates the mind on the tasks in hand, and prevents the dissipation of energy on social and sexual matters unrelated to work”

The more reactive a child’s amygdala, the higher his heart rate is likely to be, the more widely dilated his eyes, the tighter his vocal cods, the more cortisol (a stress hormone) in his saliva – the more jangled he’s likely to feel when he confronts something new and stimulating.

…“the orchid hypothesis” by David Dobbs in a wonderful article in The Atlantic. This theory holds that many children are like dandelions, able to thrive in just about any environment. But others, including the high-reactive types that Kagan studied, are more like orchids: they wilt easily, but under the right conditions can grow strong and magnificent.

The highly sensitive tend to be philosophical or spiritual in their orientation, rather than materialistic or hedonistic.

They tend to have unusually strong consciences. They avoid violent movies and TV shows; they’re acutely aware of the consequences of a lapse in their own behavior.

Extroverts tend to experience more pleasure and excitement than introverts do – emotions that are activated, explains the psychologist Daniel Nettle in his illuminating book on personality, “in response to the pursuit or capture of some resource that is valued.”

the highest-performing traders tended to be emotionally stable introverts.

Introverts are “geared to inspect” and extroverts “geared to respond”.

many of us work for organizations that insist we work in teams, in offices without walls, for supervisors who value “people skills” above all.

It makes sense, say these researchers, that world travelers were more extroverted than those who stayed home – and that they passed on their traits to their children and their children’s children"

If Jesus returned to Earth and make his first stop at the Atlanta Convention Center, it would be hard to imagine a more jubilant reception.

you can probably recall a time – plenty of times – when the opinion of the most dynamic or talkative person prevailed to the detriment of all.

“…The one and only personality trait the effective ones I have encoutered did have in common was something they did not have: they had little or no ‘charisma’ and little use either for the term or what it signifies”

“Most leading in a corporation is done in small meetings and it’s done at a distance, through written and video communications”

These exceptional CEOs were known not for their flash or charisma but for the extreme humility coupled with intense professional will.

He wasn’t concerned with getting credit or even with being in charge; he simply assigned work to those who could perform it best. This meant delegating some of his most interesting, meaningful, and important tasks – work that other leaders would have kept for themselves.

today’s employees inhabit open office plans, in which no one has a room of his or her own, the only walls are the ones holding up the building, and senior executives operate from the center of the boundary-less floor along with everyone else.

I have this experience at AiFi and it is very bad. One cannot concentrate properly when there’s people around so I try to go in early to have some quiet time. I also feel I am more productive when I work from home

We failed to realized that what makes sense for the asynchronous, relatively anonymous interactions of the Internet might not work as well inside the face-to-face, politically charged, acoustically noisy confines of an open-plan office.

“Serious study alone” is the srongest predictor of skill for tournament-rated chess players, for example.

“…I learned to not worry so much about th outcome, but to concentrate on the step I was on and to try to do it as perfectly as I could when I was doing it”

… Top performers overwhelmingly worked for companies that gave their workers the most privacy, personal space, control over their physical environments, and freedom from interruption.

Studies have shown that performance gets worse as group size increases: groups of nine generate fewer and poorer ideas compared to groups of six, which does worse than groups of four.

This reminds me of the “two pizza” rule used or said to be used at Amazon to set the perfect team size.

..online brainstorming. Groups brainstorming electronically, when properly managed, not only do better than individuals, research shows’ the larger the group, the better it performs.

This is very cool an interesting. The only challenge I see here is finding a very good tool for this type of brainstorming. Using email or other communications solutions is bound to fail since the communication will get messy at some point.

An approach that has sort of worked for us so far is to to use Gitlab issues.

That was what collaboration meant for Woz (Steve Wozniak): the ability to share a donut and a brainwave with his laid-back, nonjudgmental, poorly dressed colleagues – who minded not a whit when he disappeared into his cubicle to get the real work done.

The amygdala is located deep in the limbic system, an ancient brain network found even in primitive animals like mice and rats. This network – sometimes called the “emotional brain” – underlies many of the basic instincts we share with these animals, such as appetite, sex drive, and fear.

“Every behavior has more than one cause. Don’t ever forget that! For every child who’s slow to warm up, yes, there will be statistically more high-reactives, but you can be slow to warm up because of how you spent the first three and a half years of your life!”

A gene know as the serotonin-transporter (SERT) gene, or 5-HTTLPR, helps to regulate the processing of serotonin, a neurotransmitter that affects mood. A particular variation, or allele, of this gene, sometimes referred to as the “short” allele, is thought to be associated with high reactivity and introversion, as well as a heightened risk of depression in humans who have had difficult lives.

Enjoyment appears at the boundary between boredom and anxiety, when the challenges ore just balanced with the person’s capacity to act.

We can stretch our personalities, but only up to a point. Our inborn temperaments influence us, regardless of the lives we lead.

It turns out that it’s not only humans that divide into those who “watch and wait” and others who “just do it”. More than a hundred species in the animal kingdom are organized in roughly this way.

A reward-sensitive person is highly motivated to seek rewards – from a promotion to a lottery jackpot to an enjoyable evening out with friends.

Your biggest challenge may be to fully harness your strengths.

So stay true to your own nature. If you like to do things in a slow and steady way, don’t let others make you feel as if you have to race.

Those who know do not speak. Those who speak do not know.

Many Asian cultures are team-oriented.

Western culture, by contrast, is organized around the individual. We see ourselves as self-contained units; our destiny is to express ourselves, to follow our bliss, to be free of undue restrain, to achieve the one thing that we, and we alone, were brought into this world to do.

In the United States, he warned, you need style as well as substance if you want to get ahead. It may not be fair, and it might not be the best way of judging a person’s contribution to the bottom line, “but if you don’t have charisma you can be the most brilliant person in the world and you’ll still be disrespected”.

There’s a limit to how much we can control our self-presentation. This is partly because of a phenomenon called behavioral leakage, in which our true selves seep out via unconscious body language.

The meeting of two personalities is like the contact of two chemical substances; if there is any reaction, both are transformed.

It can be hard for extroverts to understand how badly introverts need to recharge at the end of a busy day.

It’s also hard for introverts to understand how hurtful their silence can be.

Israelis, says the researchers, “are not likely to view (disagreement) as a sign of disrespect, but as a signal that the opposing party is concerned and is passionately engaged in the task”.

We’re best off when we don’t allow ourselves to go to our angry place.

He can ask himself whether the thing that’s making him so angry is really that important.