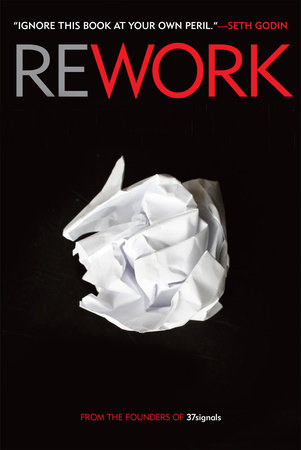 This book is awesome.

A light read with plenty of graphics and visualizations. It goes straight to the point. No buzzwords, no fancy sh*t.

If you are building, growing a company, this book is a must read. I read it during my first-stint at a startup. It was eye-opening. So many errors and distractions. This book tells you to simplify stuff, to seek out the essential parts of your product, to listen to your customer, to hire slowly. There’s no need to pursue “hyper-growth” just for the sake of it. Jason and David warn us about all the buzzwords and BS that’s out there in an attempt to help us.

Success is the experience that actually counts.

Evolution doesn’t linger on past failures, it’s always building what worked. So should you.

The timing of long-range plans is screwed up too. You have the most information when you’re doing something, not before you’ve done it.

Not only is this workaholism unnecessary, it’s stupid. Working more doesn’t mean you care more or get more done. It just means you work more.

Workaholics miss the point, too. They try to fix problems by throwing sheer hours at them. They try to make up for intellectual laziness with brute force.

What you do is your legacy. Don’t sit around and wait for someone else to make the change you want to see. And don’t think it takes a huge team to make that difference either.

The easiest, most straightforward way to create a great product or service is to make something you want to use.

“Scratch your own itch.”

The perfect time never arrives. You’re always too young or old or busy or broke or something else. If you constantly fret about timing things perfectly, they’ll never happen.

Strong opinions aren’t free. You’ll turn some people off. They’ll accuse you of being arrogant and aloof. That’s life. For everyone who loves you, there will be others who hate you. If no ones’ upset by what you’re saying, you’re probably not pushing hard enough.

Standing for something isn’t just about writing it down. It’s about believing it and living it.

Constraints are advantages in disguise. Limited resources force you to make do with what you’ve got.

We make sure to have only one or two people working on a product at a time. And we always keep features to a minimum. Boxing ourselves in this way prevents us from creating bloated products.

It’s the stuff you leave out that matters. So constantly look for things to remove, simplify, and streamline. Be a curator. Stick to what’s truly essential. Pare things down until you’re left with only the most important stuff. Then do it again. You can always add stuff back in later if you need to.

Focus on what won’t change (I think this is originally attributed to Jeff Bezos).

The core of your business should be build around things that won’t change. Things that people are going to want today and ten years from now. Those are the things you should invest in.

People use equipment as a crutch. They don’t want to put in the hours on the driving range so they spend a ton in the pro shop. They’re looking for a shortcut. But you just don’t need the best gear in the world to be good.

Too much ketchup can ruin the fries. Value is about balance.

Sometimes abandoning what you’re working on is the right move, even if you’ve already put in a lot of effort. Don’t throw good time after bad work.

Interruption is not collaboration, it’s just interruption. And when you’re interrupted, you’re not getting work done.

When you think about it, the costs of meetings is staggering. Let’s say you’re going to schedule a meeting that lasts one hour, and you invite ten people to attend. That’s actually a ten-hour meeting, not a one-hour meeting. You’re trading ten hours of productivity for one hour of meeting time. And it’s probably like fifteen hours, because there are mental switching costs that come with stopping what you’re doing, going somewhere else to meet, and then resuming what you were doing beforehand.

To keep your momentum and motivation up, get in the habit of accomplishing small victories along the way. Even a tiny improvement can give you a good jolt of momentum.

Break the big thing into smaller things. The smaller it is, the easier it is to estimate.

Once ego and pride are on the line, you can’t change your mind without looking bad. The desire to save face trumps the desire to make the right call. And then there’s inertia too: The more steam you put into going in one direction, the harder it is to change course.

You rarely regret saying no. But you often wind up regretting saying yes.

We’d rather our customers grow out of our products eventually than never be able to grow into them in the first place.

The requests that really matter are the ones you’ll hear over and over.

Wabi-sabi values character and uniqueness over a shiny facade. It teaches that cracks and scratches in things should be embraced. It’s also about simplicity. You strip things down and then use what you have.

Trade the dream of overnight success for slow, measured growth. It’s hard, but you have to be patient. You have to grind it out. You have to do it for a long time before the right people notice.

You should want to be intimately involved in all aspects of your business. Otherwise you’ll wind up in the dark, putting your fate solely in the hands of others. That’s dangerous.

[ There’s a fine line between this and micro-management. The former is good, the latter can kill motivation… ]

The right time to hire is when there’s more work than you can handle for a sustained period of time. There should be things you can’t do anymore. You should notice the quality level slipping. That’s when you’re hurting. And that’s when it’s time to hire, not earlier.

So hire slowly. It’s the only way to avoid winding up at a cocktail party of strangers.

There’s surprisingly little difference between a candidate with six months of experience and one with six years. The real difference comes from the individual’s dedication, personality, and intelligence.

Too much time in academia can actually do you harm.

That’s because being a good writer is about mor than writing. Clear writing is a sign of clear thinking. Great writers know how to communicate. They make things easy to understand. They can put themselves in someone else’s shoes. They know what to omit. And those are qualities you want in a candidate.

This isn’t about casual Fridays or bring-your-dog-to-work day. (If those are such good things, then why aren’t you doing them every day of the week?) Rockstar environments develop out of trust, autonomy, and responsibility. They’re a result of giving people the privacy, workspace, and tools they deserve. Great environments show respect for the people who do the work and how they do it.

As the saying goes. “If you want something done, ask the busiest person you know.” You want busy people. People who have a life outside of work. People who care about more than one thing. You shouldn’t expect the job to be someone’s entire life – at least not if you want to keep them around for a long time.

There are four-letter words you should never use in business. They’re not fuck or shit. They’re need, must, can’t, easy, just, only, and fast. These words get in the way of health communication. They are red flags that introduce animosity, torpedo good discussions, and cause projects to be late.