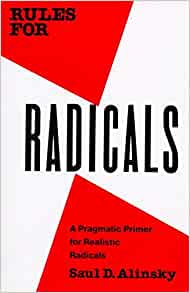 The book is a lesson on political organization but can be seen as a lesson for life. Power, for example is not about what you have but about what your opponent thinks you have. The world needs to be taken as is, with radical realism. Only in this way you will be able to change the things you want to change. Focus and direction are other important components. Without focus and clarity an organizer can’t do much in the way of organizing. The same can be said for life in general. Finally, without optimism, radical optimism, life can’t be lived.

The young are inundated with a barrage of information and facts so overwhelming that the world has come to seem an utter bedlam, which has them spinning in a frenzy, looking for what man has always looked for from the beginning of time, a way of life that has some meaning or sense.

Let us in the name of radical pragmatism not forget that in our system with all its repressions we can still speak out and denounce the administration, attack its policies, work to build an opposition political base. True, there is government harassment, but there still is that relative freedom to fight. I can attack my government, try o organize to change it. That’s more than I can do in Moscow, Peking, or Havana.

Parts of the far left have gone so far in the political circle that they are now all but indistinguishable from the extreme right. It reminds me of the days when Hitler, new on the scene, was excused for his actions by “humanitarians” on the grounds of a paternal rejection and childhood trauma.

Dogma is the enemy of human freedom. Dogma must be watch for and apprehended at every turn and twist of the revolutionary movement.

In the world as it is, the stream of events surges endlessly onward with death as the only terminus. One never reaches the horizon; it is always just beyond, ever beckoning onwards; it is the pursuit of life itself. This is the world as it is. This is where you start.

Niels Bohr pointed out that the appearance of contradictions was a signal that the experiment was on the right track: “There is not much hope if we have only one difficulty, but when we have two, we can match them off against each other.”

Without optimism, there is no reason to carry on.

“If we think of the struggle as a climb up a mountain, then we must visualize a mountain with no top. We see a top, but when we finally reach it, the overcast rises and we find ourselves merely on a bluff. The mountain continues on up. Now we see the”real" top ahead of us, and strive for it, only to find we’ve reached another bluff, the top still above us. And so it goes on, interminably.

Knowing that the mountain has no top, that it is a perpetual quest from plateau to plateau, the question arises, “Why the struggle, the conflict, the heartbreak, the danger, the sacrifice. Why the constant climb?” Our answer is the same as that which a real mountain climber gives when he is asked why he does what he does. “Because it’s there.” Because life is there ahead of you and either one tests oneself in its challenges or huddles in the valleys in a dreamless day-to-day existence whose only purpose is the preservation of an illusory security and safety. The latter is what the vast majority of people choose to do, fearing the adventure into the unknown. Paradoxically, they give up the dream of what may lie ahead on the heights of tomorrow for a perpetual nightmare - an endless succession of days fearing the loss of a tenuous security."

The most unethical of all means is the non-use of any means. It is this species of man who so vehemently and militantly participated in that classically idealistic debate at the old League of Nations on the ethical differences between defensive and offensive weapons. Their fears of action drive them to refuge in an ethics so divorced from the politics of life that it can apply only to angels, not to men.

[Relevant today as well. Many people then wonder why a Trump or a Brexit happen…]

" I have only one purpose, the destruction of Hitler, and my life is much simplified thereby. If Hitler invaded Hell I would make at least a favorable reference to the Devil in the House of Commons."

To me ethics is doing what is best for the most.

More rationalization is indispensable at all times of action whether to justify the selection or the use of ends or means. Machiavelli’s blindness to the necessity for moral clothing to all acts and motives – he said “politics has no relation to morals” – was his major weakness.

To pander to those who have no stomach for straight language, and insist upon bland, non controversial sauces, is a waste of time.

[[ Political correctness is a waste of time. ]]

A free and open society is an on-going conflict, interrupted periodically by compromises – which then become the start for the continuation of conflict, compromise, and on ad infinitum.

Life is the expectation of the unexpected – the things you worry about rarely happen. Something, new, the unexpected, will usually come in from outside the ball park.

Imagination is not only the fuel for the force that keeps organizers organizing, it is also the basis for effective tactics and action. The organizer knows that the real action is in the reaction of the opposition.

A sense of humor enables him to maintain his perspective and see himself for what he really is: a bit of dust that burns for a fleeting second. A sense of humor is incompatible with the complete acceptance of any dogma, any religious, political, or economic prescription for salvation.

Ego is unreserved confidence in one’s ability to do what he believes must be done. An organizer must accept, without fear or worry, that the odds are always against him. Having this kind of ego, he is a doer and he does.

Tactics means doing what you can with what you have. Tactics are those consciously deliberate acts by which human beings live with each other and deal with the world around them.

The Control Of Nature By John McPhee
Book Summary: Of Human Freedom
A Guide to the Good Life By William B. Irvine