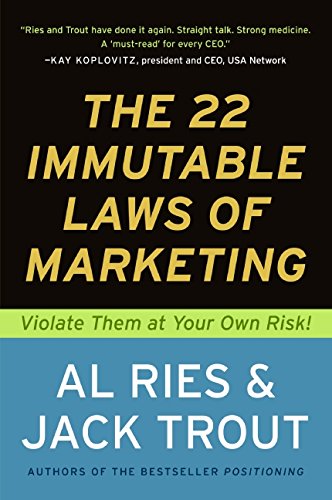 This book is very short and actionable. It can be read in one sitting. If you’re a marketer you’ve probably read it or know about it since it is one of the most famous and timeless pieces on the art of marketing. If you’re not—like me—then you should read it. You will understand what marketing is all about:

The format of the book is quite simple: one chapter per law or one law per chapter with lots of relevant examples. What follows is a brief summary of all the laws.

“Marketing is a game of mental warfare. It’s a battle of perceptions, not products or services.”

“Marketing is a battle of ideas. So if you are to succeed, you must have an idea or attribute of your own to focus your efforts around.”

“Have patience. The immutable laws of marketing will help you achieve success. And success is the best revenge of all.”