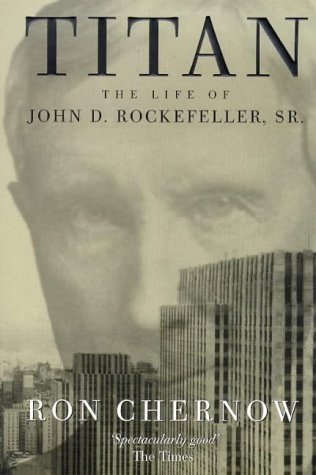 Although longer than needed and slow at times, I enjoyed the book very much. Ron Chernow manages to give us the full picture: Rockefeller the most successful businessman of his time and father of the oil industry as we know it; Rockefeller the man, the stoic and loving father and Rockefeller the philanthropist.

John gloried in the rigors of country life, which, he came to believe, toughened him for later industrial struggle. His frugal boyhood hardened an already stoic nature and made him proof against later adversity

He was a slow learner but patient and persistent and, like J.P. Morgan and Jay Gould, exhibited a terrific head for math. “I was not an easy student, and I had to apply myself diligently to prepare my lessons”

John D. Rockefeller drew strength by simplifying reality and strongly believed that excessive reflection upon unpleasant but unalterable events only weakened one’s resolve in the face of enemies.

“Never mind the crowd […] Keep away from it. Attend to your own business”

“I was working every day at my business - the business of looking for work. I put in my full time at this every day”

John D. Rockefeller took such internal monitoring to an advanced stage. Like a good Puritan, he scrutinized his daily activities and regulated his desires hoping to banish spontaneity and unpredictability from his life. Whenever ambition was about to devour him, his conscience urged restraint

He listened closely to what people said and filed away as much information as he could, repeating valuable information to himself until it was memorized. There was humility in his eagerness to learn. As he said “It is very important to remember what other people tell you, not so much what you yourself already know”

Rockefeller succeeded because he believed in the long-term prospects of the business and never treated it as a mirage that would soon fade.

(Similar to Buffet and Bezos).

The more agitated others became, the calmer he grew.

(Similar to how it seems that Stephen Curry becomes more accurate as the clock runs down!)

He always moved into battle backed by abundant cash. Whether riding out downturns or coasting on booms, he kept plentiful reserves and won many bidding contests simply because his war chest was deeper.

He worked at a more leisurely pace than many other executives, napping daily after lunch and often dozing in a lounge chair after dinner.

“He always took the utmost care to examine any project thoroughly; then when convinced it was safe, put it through without further question”

Rockefeller equated silence with strength: Weak men had loose tongues and blabbed to reporters, while prudent businessmen kept their own counsel. Two of his most cherished maxims were “Success come from keeping the ears open and the mouth closed” and “A man of words and not of deeds is like a garden full of weeds”.

So highly did Rockefeller value personnell that during the first years of Standard Oil he personally attended to routine hiring matters.

(Employees are the most valuable asset of a company)

At first, he tested them exhaustively, yet once he trusted them, he bestowed enormous power upon them and didn’t intrude unless something radically misfired. “Often the best way to develop workers – when you are sure they have character and think they have ability – is to take them to a deep place, throw them in and make them sink or swim”.

“I never felt the need of scientific knowledge, have never felt it. A young man who wants to succeed in business does not require chemistry of physics. He can always hire scientists”

He believed there was a time to think and then a time to act. He brooded over problems and quietly matured plans over extended periods.

Standard Oil had taught the American public an important but paradoxical lesson: Free markets, if left completely to their own devices, can wind up terribly unfree.

“I should say in general the advantage of education is to better fit a man for life’s work. I would advise young men to take a college course, as a rule, but think some are just as well off with a thorough business training.”

(This is even truer nowadays with some much knowledge online. College is optional.)

“Instead of giving alms to beggars, if anything can be donde to remove the causes which lead to the existence of beggars, then something deeper and broader and more worthwhile will have been accomplished.”

“Never be afraid to stand up for a position when you know you are right.”

“… you should never be a borrower, but always long on cash.”

“Control of self wins the battle, for it means control of others.” – Cettie Rockefeller

(This has been true throughout all of history. Business should be just that.)

“Only fools get swelled up over money.” Comfortable with himself, he needed no outward validation of what he had accomplished. We can criticize him for lack of imagination, but not for weakness.

That Rockefeller placed scientists, not lay trustees, in charge of expenditures was thought revolutionary. This was the institutes’ secret formula: gather great minds, liberate them from petty cares, and let them chase intellectual chimeras without pressure or meddling.

How to Live on Twenty Four Hours a Day By Arnold Bennett
The Meaning Of It All By Richard P. Feynman
What I Talk About When I Talk About Running By Haruki Murakami