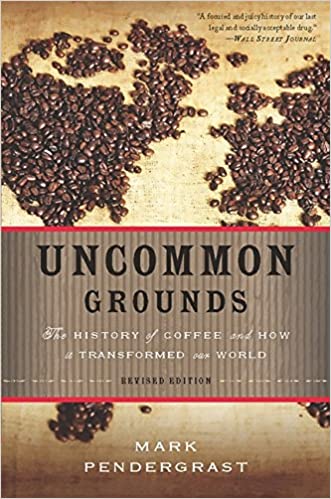 Even though I am coffee fan (and addict some might say), this was my first book about coffee. I chose to read this one after doing some research. I want to read about the history of coffee and how it came to as ubiquitous as it is today.

In this regard, the book didn’t disappoint. Pendergrast traces all the history of coffee going into a lot of detail in the history of coffee in North America. But, the style in which the description is done is boring. The language is flat and it feels almost like a simple recount of events rather than a story.

“The voodoo priest and all his powders were as nothing compared to espresso, cappuccino, and mocha, which are stronger than all the religions of the world combined, and perhaps stronger than the human soul itself.”- Mark Helprin

Coffee’s quality is first determined by essentials such as type of plant, soil conditions, and growing altitude. It can be ruined at any step along the line. A coffee bean greedily absorbs odors and flavors. Too much moisture produces mold. A too-light roast produces undeveloped, bitter coffee, while over-roasted coffee resembles charcoal. After roasting, the bean stales quickly unless used within a week or so. Boiling or sitting on a hot plate quickly reduces the fines brew to a stale cup of black bile.

It aided considerably in the sobering of an alcohol-soaked Europe and provided a social and intellectual catalyst as well.

The Civil War gave soldiers a permanent taste for the drink. Each Union soldier’s daily allotment included one-tenth of a pound of green coffee beans that, translated into annual consumption, was a whopping thirty-six pounds per capita.

“I believe the only way to conquer is to walk where the battle rages most fiercely, and fight, fight until you win,” she wrote [Alice Foote MacDougall, coffee roaster]. “It is this kind of determination that man has acquired through long generations, and the woman who is to conquer in the business world must acquire it too if she is to succeed.”

The farther south, the darker the roast tended to be, so that southern Italians nearly turned their beans to charcoal, while northern Italians enjoyed a moderate roast. Throughout most of Europe, the superior drip method predominated.

In Italy and to a less degree in France the new espresso (“made on the spur of the moment”) method increased in popularity during the thirties. Made by forcing hot water under high pressure through very fine grounds, espresso coffee, which takes less than thirty seconds to brew properly, is dark, rich, complex, concentrated, and satiny, with a rich hazel-colored cream on top and an overwhelming aroma.

The allure of the coffehouse reached the North Beach area of San Francisco when window washer Giovanni Giotta opened the Caffé Trieste in 1957. In the back section, poets Allen Ginsburg and Bob Kaufman brooded over the faults of Eisenhower’s America, while the Italians in the front laughed at them, wondering aloud, “When are they gonna work?”

“My story is as much one of perseverance and drive as it is of talent and luck. I willed it to happen. I took my life in my hands, learned from anyone I could, grabbed what opportunity I could, and molded my success step by step” - Howard Schultz (Starbucks’ Founder).

“The coffehouse is the ideal place for people who want to be alone but need company for it.” - Alfred Poger

Book Summary: Range By David Epstein
The Lessons of History By Will and Ariel Durant
How to Take Smart Notes By Sönke Ahrens